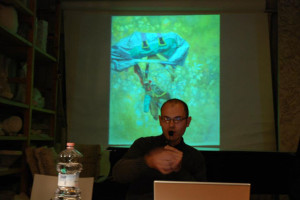 In 2006 the project of a series of conferences at the Carlo Zauli Museum entitled I lunedì del Contemporaneo (‘Mondays of the Contemporary’) was born, conceived by Matteo Zauli with the clear desire to link the identity of our region to the world, the atmosphere and the content of contemporary art.

Based on the hypothesis that art is a tool for the interpretation of individuality and of the social system in which we live, the project offers a key to understanding and interpreting some of the most significant artistic movements of our time. In the scope of conferences past, issues related to contemporary art have been addressed which range from interventions of a historical nature to those with socio-economic implications.

In 2010, I lunedì del Contemporaneo became Avventure nello spazio dell’arte (‘Adventures in the Art Space’), an exhibition that represented a journey between several locations and projects managed with a great deal of originality, in an autonomous and often peripheral manner, and hence with extremely limited resources and prospects, demonstrating, as Frosi and Perrone wrote upon presenting their speech, “how ambiguous and dangerous it is to dedicate oneself to culture in Italy”.